How did you become this medical specialist for musicians?
I am an orthopedic surgeon but also an amateur musician, classical guitarist and pianist. At one point I saw musicians, was agitated by pain and discomfort, and came up with the idea of ​​a European Diploma in Arts Medicine, a two-year course with musicians and health professionals.

Why is this medicine of the arts so unknown?
It has been around for nearly thirty years. You should know that musicians have been let down for a very long time.

Because, for dancers, there is also this culture of suffering?
Yes, it was necessary to play out of pain. I have longtime concert friends who tell me it’s normal to have pain and tendinopathy… A musician is a bit like an athlete: you have to suffer to be the best. But about thirty years ago, Professor Raul Tubiana began to take an interest in musicians.

In Creuse, specialists come to enhance the various services at the Clinique de la Marche

It was an obstacle course. He came with a physical therapist to the conservatory and said to the teacher: “Maybe by adjusting this and that, this situation …”.

It took years and years for the musicians themselves to become aware of all the ailments they could suffer from.

When you launched your consultancy, did you have musicians who came in right away?
In Saint-Junien Hospital (Haute-Vienne), where I created an orthopedic service, I launched a consultation for musicians in 2007. I had people right away because I was known there. I had taken care of a professional guitarist who had thumb dystonia. who were treated with botulinum toxin. As a musician, I also worked with the music school Ambazac, and one thing leads to another, I met Frantz Doré, general director of the Limoges Opera.

A musician who is injured or has an ENT problem, Frantz calls me and says, “Thierry, can you book me an ENT appointment urgently?”

I have a whole network of practitioners in the area that I can contact about this. Not only for opera musicians: one day, I had a soprano from Paris who had a serious problem of hoarseness, with whom I managed to make an appointment during the day.

You are few in France. Do you receive musicians from everywhere? I think we’re about ten. Yes, I see musicians regularly because there is this emergency therapeutic aspect that I was telling you about, but there are also simple consultations like the ones I have at the Opera or at the Clinique de la Marche. Three quarters of musicians have pathology, it’s huge!

You should know that musicians have experienced medical wanderings for a very long time. Some, for example, undergo surgery for nothing! Like carpal tunnel for example. They go to see a regular surgeon, who does an electromyogram and performs an operation. I had a classical guitarist like that who had surgery for nothing. It was a problem with posture, he would always rest his elbow on his thighs…

You just have to work on the situation and carpal tunnel syndrome can very well go away! This is the problem with this medical wanderlust: musicians will be entitled to a lot of examinations, operations and rehabilitation, but without a diagnosis.

However, not everything can be solved by changing the situation, right? What are the most common diseases among musicians?
Firstly, there is everything from overwork: tendinopathy in the elbow, hand or even the foot of drummers and percussionists. It’s topical so there’s specific medical treatment, maybe physical therapy sessions, infiltration.

I had the case of a young violinist who wanted to handle a big Tchaikovsky concerto: She works seven, eight hours a day and all of a sudden, she can’t play anymore. As soon as I picked up your instrument, I felt a lot of pain. You couldn’t play for a year!

What happens is that musicians work a lot with their hands and arms. But to carry a musical instrument they also help themselves, without necessarily knowing it, with their shoulder girdle where there are muscles that we don’t know! It is up to us to make them aware of this through physical therapy. To teach them to work on their shoulders to combat this upper extremity fatigue.

What are these special consultations that the musicians of the Limoges Opera are entitled to?

Next, we also see everything that is canal syndrome: carpal tunnel, compression of the ulnar nerve … Cervical curvatures, shoulder destabilization, hyperflexion too: an advantage at first for musicians to have a very soft tone. But excessive aging is bad. It’s like with a dancer: the joints aren’t made for opening holes.

Are there still more serious diseases that a musician cannot cure?
Functional muscle dystonia. In the general population, this is 1 case in 100,000. Among musicians, it’s an issue for 30,000! It can happen suddenly. There are great concert artists who said to themselves while playing: “Something just happened.”

Or it comes on gradually, it can develop over two or three years and musicians make up, without even realizing it. When we get it back, it may be too late. It takes a lot of rehabilitation, without playing: you have to reprogram the whole hand! A few years ago, a TV channel did a report on my work, and after that, I had quite a few people with dystonia from all over France who came to see me. Including a young student who wrote a lot and had dystonia. Also called writer’s cramp, it’s a term we don’t like because dystonia is so painful.

For some musicians who suffer from it, we can support them for two or three years, but others will never regain their initial level.

Are there famous musicians who suffered from it without anyone knowing it because of the taboos of the disease?
So Fleischer dared, in the 1980s, to say that he could no longer perform in concert due to functional dystonia.
And then there’s Schumann, a typical case of a stress disorder sufferer. His mother wanted him to play the piano a lot, seven, eight hours a day. At the age of 20, he started developing something strange in his middle finger, involuntary contractions… He had a lot of treatments at that time: electrotherapy, blood baths, and a cigar box (to immobilize the finger).

That’s why he preferred to compose: at some point, he thought to himself, he also composed a very beautiful toccata of his, without using the third finger!

I say dystonia is really sneaky because for example a guitarist would only feel it at the instrument, not if he took a broomstick to play an imaginary guitar! There are also those who will develop dystonia only on one scale, say descending.

When you have to operate on a musician, do you have more pressure than the average patient because of what is at stake? It is his tool…
Management in the context of trauma, eg fracture, is essential as it is for any patient.

There are also all those diseases that can happen to musicians that require very delicate operations. Dupuytren’s disease, for example: a type of fibrosis that occurs in the hand. It is also called Viking disease, because it is hereditary especially in the Nordic countries.

I have operated on a double bass Guéret player: you have to be very careful because you risk damaging a nerve while playing. We also perform operations in case of radiculosis – knitting disease – osteochondrosis between the trapezius and the first metatarsal. A violinist, if played with her little finger, needs an accuracy of 1 to 2 mm.

“Sudden pain in my hand: I can’t play anymore”

It was like an electric shock. Sudden pain in my hand: I couldn’t move my ring finger. Nicolas Houari, a guitar player for thirty years, finds himself in a daze overnight. It’s impossible for me to play with this pain. It was his physiotherapist from Guéret, Serge Ducleroir, who advised him to go see Doctor Gougam, who had just arrived at the Marche clinic.

“When I came the first time, he explained to me that he was a musician himself. Very attentive. Then he asked me to return my instruments and immediately noticed a bad posture. On his advice, I went to consult a physiotherapist in Paris, in the clinic of musicians, Isabelle Campion. Comes Musicians from all over the world to see her! I only saw her twice. She said to me: “If you do what I tell you, you’ll get back on the train and play again!”.

what he did. “I took my pain into patience and learned to play again: I just had to change my position. Before, I always played with my shoulders down, never standing up straight. Today, I don’t play standing up anymore and always play as a classical guitarist. I even made an album and a demo of it all.” 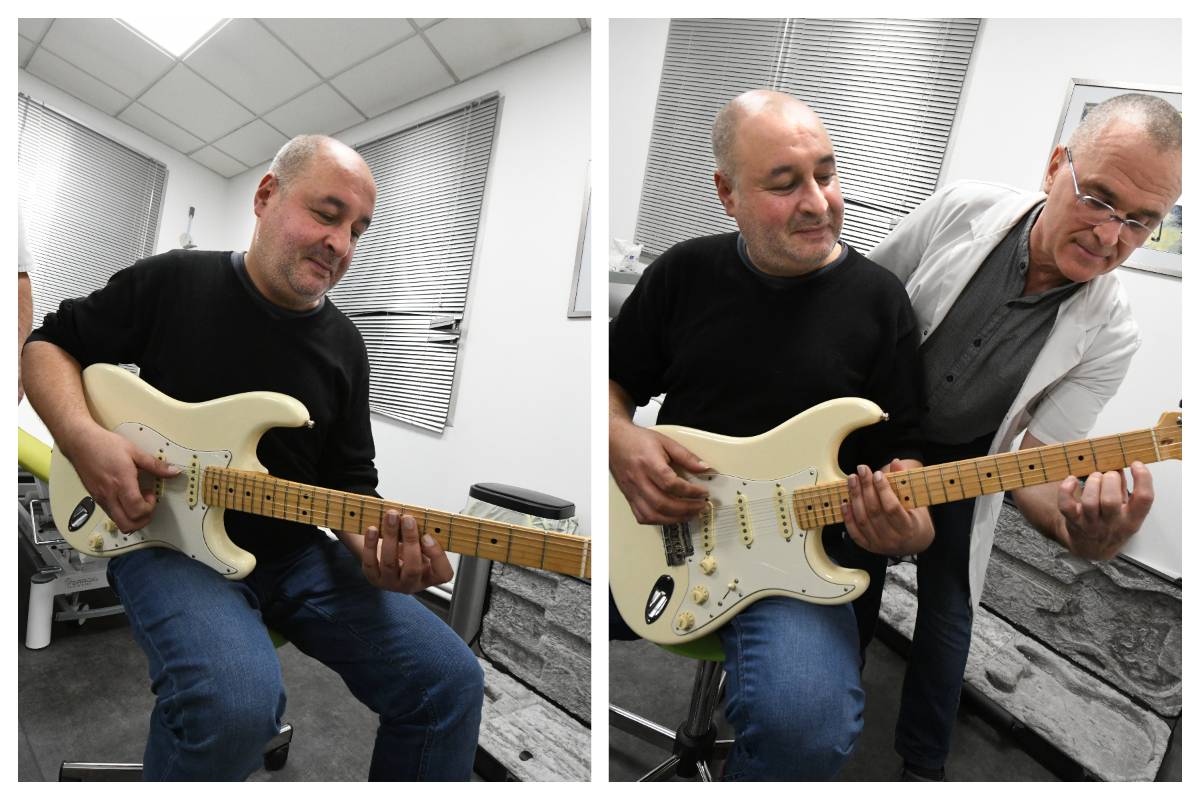 A simple change of attitude allowed this musician to play the guitar again without pain.

“It’s a great victory,” smiles Dr. Jugham. There, it was just a postural problem for the entire upper limb. He made up and made up until the ax fell off and he could no longer play. My role was just to make the correct diagnosis and direct it to the person in charge.” The guitarist from Creuse would not sum up the role the doctor played in his recovery thus: “The way we take care of you is essential. Once you arrive, we listen to you, even if you are just an amateur musician. We diagnose and above all we look for solutions.”