Scheduled for November 18 at Théâtre Halle Roublot and at Mouffetard – Théâtre de la Marionnette in Paris from November 22 to 30, Rebetico Presented by the Anima Théâtre Company is a puppet show and holographic projections, a gem of fidelity in images that carry a tale that is personal, universal, intimate, and political. A work with strong cinematic accents that tells of nostalgia, exile, and the harshness of the journey for those fleeing in isolation. 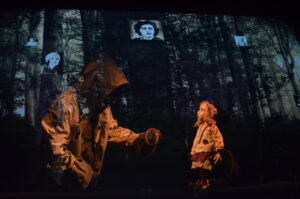 It starts with a picture. And by music. The image is a black and white photograph of a woman from another era, and is one of the common threads of this show which achieves the feat of presenting a play that is both transparent and coherent while being completely silent. The music is “rebetiko”, a popular Greek music that has been described as “outlaw blues”, music with largely oriental influences that talks about the life of slums inhabited by exiles and marginalized people. This music is the soundtrack to the show, which Niccolo Terassi attacks from the very beginning.

The focus then shifts to a device a person does not often see: above the processing table, a one-way mirror tilted at a 45-degree angle towards the spectators, and behind it, a new processing space in the background in which you find a projection screen. The set certainly allows you to play “outside the castle” – so to speak, because if there is a castle, it’s of the truly amazing kind – but above all it allows for viewing images. Some may appear on screen in the background, but most of it is reflected in the glass creating strangely ethereal 3D effects, which oddly fit with the atmosphere of the show.

On the “invisible” manipulation side, the puppets appear through glass, with a dark theatrical effect as the two manipulators wear dark clothes that make them disappear, including black veils that hide their faces. It seems that this space is destined to represent, if not the present, then at least a temporal close to the present. Inside, the dolls are located between several planes on which images can appear, in front of or behind them, a rare and complex device, similar to the one used for example in De l’autre cote du citron by the company À tomorrow my love. This allows for interesting depth effects, even if the puppeteers’ job has to be made more delicate. The background screen allows you to play a little shadow theater: the latter comes next to create an additional game plan between the image projected in the back and the puppet being manipulated in front of the screen.

Côté manipulation in real time, the marionettes – which représentent majoritairement des enfants sur les routes de l’exil, avec toutes les avanies qu’on peut s’imaginer, dans une temporalité qui est celle du passé – sont animes sur l’espace de la table. The puppeteers are then sometimes dressed in costumes, posing as adults who surround the children, whether they are members of their own family, or make up en route encounters, often unfriendly. But sometimes they also play around by hiding behind the table, when the child is left to himself.

In this complex apparatus, the puppeteers act as goldsmiths. They are forced to move from one measure to another, to step in and out, to tune in with the videos or focus fully, staying attentive to the rhythm that weaves with the musicianship. The cadence is right, the handling is gentle when necessary, the whole fluid. This result must not be easy, especially since in the absence of dialogue the audience’s attention is focused on the puppets and the signals sent by their movements: no approximation is possible. So we must applaud the quality of work done.

The peculiarity of the device, the puppets that play in each of these two spaces can cross paths: in fact, those that are manipulated on the table in front can also play “horizontal” scenes, lying down, that the audience can then follow by looking at their reflection in The glass which then gives it a 3D effect and is the same height as that ‘background’. In this way, the dolls “from the castle” can coexist in the picture with the dolls “from the table”. Sometimes we are a little lost between the different spaces, the stunned eye no longer knowing where to rest for a brief moment, but we finally understand the conventions of staging and quickly pick up the thread of the story – and the suspension of disbelief that accompanies it.

All that hardware, specifically, might seem excessive and cumbersome, that said. It is not so: it lets itself be forgotten most of the time, because it is not a gimmick, but a multiplier of possibilities placed wholly at the service of history. Photographs – often films – in black and white often, if not always, look stock photos, which it is not excluded that they make a strong impression, such as these shoes of soldiers who walk with a quick step which makes them symbolize the army. dictatorship. The use of the image is very rich: it can indicate context (eg shoes), decoration (eg, an apartment window), movement (eg, the subjective view of a road trip in the woods).

Furthermore, there is also a certain craftsmanship in the production of the images: for example, the waves of the raging sea can be represented using plastic film animated by a puppeteer who mixes with the images projected on the table. Everything is of great craftsmanship. The variety of techniques used, in scale or in 2D, somewhat literal, somewhat ephemeral, makes it possible to achieve a rich and precise visual composition, in which the different elements intermarry without clashing.

From the intimate to the political, the detour through the poetic

The subject matter dealt with has an intimate force that is evident in the dramatic intensity of the images and situations. Director Yiorgos Karakantzas, himself of Greek descent, meticulously paints the story of this child who was thrown on the paths of exile, embarked on a poor trough that was hit by a storm at sea. Not without global and contemporary resonance, when one thinks that these same roads are now taken by immigrants fleeing other persecutions, other wars, and other tragedies. The subject, without being overtly political, invites us to see past and present events from a sensitive angle. In any case, the show is poignant: these young men with the look of Gavroches torn from their parents and trying to survive their journey are definitely moving.

In addressing these questions, the doll makes it possible to take a distance, at the same time emotional and poetic. Sentimental, because the spectator can cling to the fact that this child figure is, after all, a mere object in motion, when the violence inflicted upon him becomes so strong, when he loses his parents, comes close to drowning, is either sold by the people who pretended to help him, or pursued by fangs The fierce… poetic, because the doll allows dreams and makes the impossible possible, because characters can fly away, disappear to appear better…

From start to finish, the accompaniment of Niccolò Terassi, which alternates between the very blue accents of hyperbolic electric guitar and compressed attacks that sound much closer to traditional music, gives a musical color to everyone. There are not many signs in the image itself that would allow the story to be attached to Greece – contributing to its universality. So, for many, it is the wholesome universe that gravitates around Rebetiko that indicates where, on the map of wars and tragedies of the world, this silent history can be located.

Briefly, Rebetico It is an optical spectacle of delicate structure, distinguished by the uniqueness of its devices, but also by the clarity of its muted dramaturgy and the subtlety of its component images – without this detracting from its poetic scope, quite the opposite.

index: Music can evoke a range of emotions and help us better understand different cultures. But what makes us listen…