We have been warned: there will be sex and blood. Sensitive souls refrain! Movie premiere Salome by Richard Strauss, however, he was sold into the Bastille Opera, and booed for Lydia Steyer’s show, and thunderous applause for Elsa van den Hever in the title role.

The opera was bustling with people that evening, and we’re rushing to it Salome Unpublished: This is actually the first new production of season 22-23 of the Paris National Opera, and the precautions usually taken in the audiovisual field are warning the viewer that “certain scenes could offend his sensitivity,” which was the subject of a previous press release from Enterprise, he did not discourage the public, but apparently quite the opposite. Far from the refined, aesthetic and sterile décor of modern production, this seemingly radical product sinks into the sordid, obscene and overly sloppy. Here there is no suggestion, everything from corruption appears, and even beyond, and permanently. But was it necessary to explain the text of the script up to this point?

As the curtain rises, Narboth exclaims, “How beautiful Princess Salome is this evening!” Attention quickly turns to the scene taking place upstairs in the set designed by Momme Hinrichs: behind a large window, in a dilapidated room under the shreds of an ordinary false ceiling, rotten animals at costume parties, each more vulgar than the other, relentlessly indulge in a brutal orgy, A nightmarish vision with slow motion and freezing tires… These are Herod’s guests to whom the servants, one by one, bring a red ribbon like gift packets, forcing them down a narrow staircase on the side of the courtyard. These victims, after experiencing assault and sexual violence, are killed, bled, wrapped in sheets and then thrown by men in full suits (indicating that the air is also rotten) into a quicklime smoking pit on the side of the garden. This continues into the first three scenes, while guards bristling with teeth and video game characters frame the well where Jochanan is being held, in the center of the group. Also while Salome was outwardly masturbating on the grating of this well and under the watchful eyes of the guards, ignoring the corpse of the Syrian captain who had committed suicide at her feet. Revelers later witnessed, from the stands, her rape by Herod, which turned out to be a gang rape that they end up participating. It is the dance of the seven veils without dancing or veiling. If Herod does not come to slowly peel the papers with his hands, down to her intimate underwear, Salome is at first motionless, then in the upward sweeps of the music the madness that catches her catches her. Then this filthy swarm rides out of which come out stained with blood. Andy Pesoch’s tacky costumes are also outrageous: it’s hard to do worse in expressing decadence: under sloppy torn heads, split laces, fishing nets, sequins and ill-tasted accessories, and (fake) boobs of Herodias, stately and bare with nipples pierced! 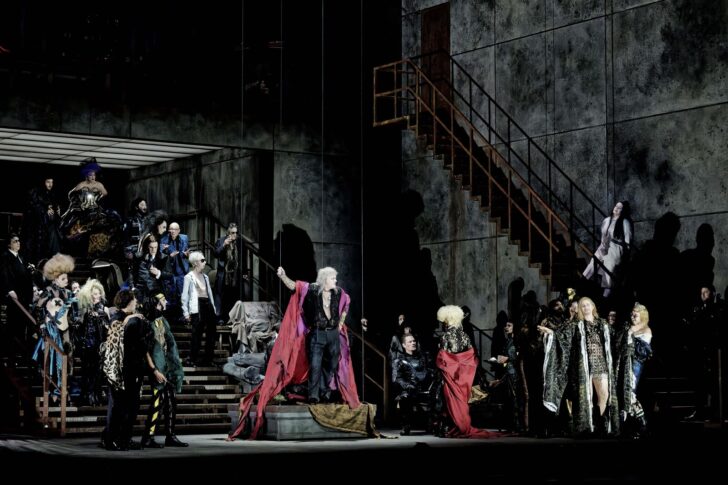 But in the end, this supposedly bleak display of the excesses of our society does not achieve its goal, it is excessive and aggravated. No retching, no fussing – we’ve seen others! – Only hatred, annoyance and necessarily disappointment. How can you stick to such visual ugliness over such wonderful music, performed here by exceptional artists? There is a gap between what we see and what we hear that the end does not justify the means, at least not those! The eye ends up “insulting” the show, so that the ear can focus on the music and the emotion it generates through its performer and what they invest in artistically and humanly. However, there were some strong moments, most notably Olaf Friese’s excellent lighting work. The first is when the cage slowly emerges from the basement to reveal Jochanaan behind its bars, lighting multiplies the characters by disturbing the shadows cast on the concrete wall. The second in the last scene that keeps a surprise: another version here but Salome’s massacre, death, crawling on the ground, (extra), while her character (singer) rises into the sky with Jochanan having his body restored. Integrity, both are intertwined in the cage. Unexpectedly, the drama ends with the victory of love, but in another world, in the afterlife. Sympathetic and moving … but an asymmetric ending that eschews all that has been swept away by meaning before (including from a psychoanalytic angle) and that makes the coherence and intrinsic strength of the work, both literary and musical, until it becomes a violent conclusion. Lydia Steyer here invents a way out for Salome … then give Salomein this last scene, a false atmosphere of Beauty and the beast (The Cocteau movie), whose heroes will turn (a strange parallel also appeared to us unexpectedly!). 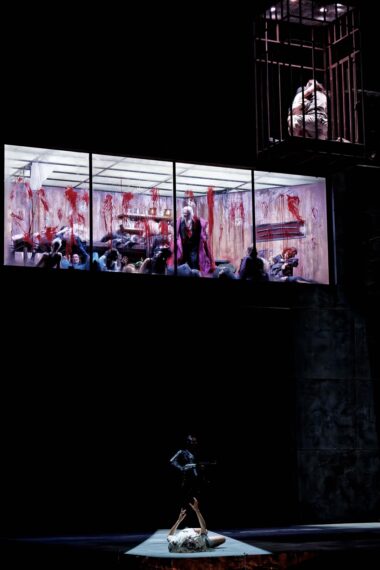 Music is presented royally. First by the Orchester de l’Opéra national de Paris with generous voices and shimmering colours, standing out among other things woodwinds, the wonderful horn section … However, Simone Young’s direction does not always allow Strauss’ music with this powerful lyricism to fully bloom in Its throbbing and fickle pulsations, sometimes weighed down by the offices of the very favorite winds of the low log. The cast is flawless and obviously benefits from excellent casting direction. The supporting roles are of high quality and very convincingly embody their characters. Let’s mention contralto Katharina Magiera who brings her sweet, round and youthful vibe to the page, knowing how people honestly moved her playing and baritone. The five Jews form a phonetically differentiated group, where the differences between intonation, tesitura, and timbre, like their opinions, increase the cacophony of their dialogue with the deaf! A clear-sounding, well-projected, even-toned Tansel Akzeybek is the perfect Narraboth, a desperate sigh, captive to his desire. Iain Paterson Jochanaan gives his dark voice with a faint timbre, wide vibrato, and his long, wide breaths are absolutely essential in supporting and spreading his vocals. Carita Matella, who played Salome here for nearly twenty years, is today a well-established Herodias, hysterical and neurotic, open and unrestrained, with her funny and pathetic expressions. His voice was solid, undamaged by time, and his expression was always correct. It constitutes a pair of most matching tenor John Dassack, Herod’s lustful and hated, constantly overflowing, his destructive energy on his entourage inexhaustible. An energy present in his trumpet voice, with a bell as clear and shiny as steel, in the service of his dominance. Finally, Elza van den Heever, who takes on this role, reveals herself as a wonderful Salome, with her plastic and powerful voice, her resilient vocals, her captivating timbre, wonderfully rounded, her luminous and at the same time complete highs, her mediums, her ease of transition from one record to another, and the versatility of Colors and toning using a wide range of nuances and dynamics. On the expressive level, it goes completely into the skin of her character, into her psyche, which gives her extraordinary strength. The character of Salome she portrays is far from visually “sexy.” She is a lunar-looking teenager, discreetly dressed in a white blouse with a turn-down collar, refusing any pretense of seduction and which in spite of itself arouses desire. Determined, she uses this power to achieve her ends, captive to her destiny. Aggressive, desperate, lyrical, provocative, poignant, frightening, brutal … All its complexities are expressed in the character that the singer has built, in her song of transcendent beauty that rises at last before the bloodstained glass.